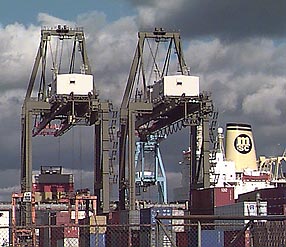 In spite of much rhetoric to the contrary, the United States coastal waters are rich in fisheries resources. While stocks of New England cod, haddock and yellowtail flounder - collectively referred to as groundfish - are currently depressed relative to former periods of high abundance, fisheries experts believe they have been replaced by equivalent amounts of other species such as dogfish and skates. Happily, due to a combination of stringent management measures and natural population processes, the majority of the groundfish stocks are now in the process of rebuilding.

The waters off the Mid-Atlantic and New England are currently home to several millions of tons of Atlantic mackerel and herring. (Exactly how many tons is a matter of some debate. Fish populations are estimated using complex statistical manipulations that dont always enjoy universal acceptance. For purposes of scale, the total weight of all the edible fish and shellfish commercially caught in 1995 from Maine to Florida was under a million tons.) Similarly, the menhaden fishery, which has been a stable source of protein-rich fish meal, fish oil and sports fishing bait for over a century, is supported by a tremendous mass of fish ranging from the Gulf of Mexico to New England. Many other species of fish and shellfish are available at high levels of abundance.

Unfortunately, some of these species - in many instances the most common - arent compatible with the culinary preferences of the U.S. seafood consumer. Much of the domestic seafood demand is for processed tuna, fresh or frozen shrimp and mild-tasting, white-fleshed fish like flounder, cod and striped bass. Conversely much of the international demand is for species unpopular with U.S. consumers but common and readily available to U.S. commercial harvesters in our inshore and offshore waters. These include herring, mackerel, dogfish and squid.

In recognition of this disparity between the fish available in our waters and the seafood preferences of our consumers, one of the goals of the Magnuson Act, the controlling Federal fisheries law which was enacted in 1976, was to replace the foreign catcher/processor fleets that were harvesting these high-demand (in international markets) species with U.S. boats and shore-based processing facilities. Another priority set forth in the Act was the development of foreign markets for the products the revitalized U.S. commercial fishing industry was producing (see the following page).

This was one of the more successful aspects of domestic commercial fisheries policy in the two decades following the passage of the Magnuson Act. From a primarily small-boat fleet fishing near-shore waters and for the most part supplying local or regional markets, the domestic commercial fishing industry has evolved into one employing state-of-the-art, ocean-spanning vessels providing competitively priced seafood to global markets. The positive impacts of this globalization have extended far beyond the fishermen, processors, dealers and consumers that have benefitted directly from it.

As the table above (from the U.S.D.O.C. Web Site www.ita.doc.gov/industry/otea/otea.html - U.S. Aggregate Foreign Trade Data: Tables 23, 24 and 25) illustrates, the U.S. trade deficit ranged from $70 billion to $170 billion in the period from 1990 to 1996. In that time annual seafood imports exceeded exports by from $2.2 to $3.6 billion dollars, accounting for approximately two percent to four percent of the total deficit each year. 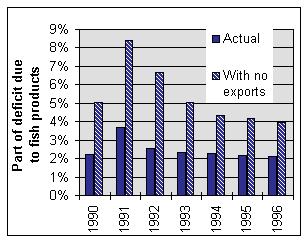 The graph to the left contrasts the actual trade deficit due to fishery products with what that deficit would have been in the absence of any fishery exports. It illustrates how the U.S. fishing industrys increasing focus on products with strong overseas demand and increasing capability to catch, process and sell those products has had a significant impact on holding down the deficit. If it werent for the export of fishery products in 1991, for example, the deficit would have risen from $67 billion to over $70 billion, an increase of four percent.

While not receiving the attention that other manufactured goods or commodities do, fishery products have a far from trivial impact on our balance of trade. The harvest of fish and shellfish from our rich coastal waters, whether to satisfy domestic demand or to supply foreign markets, is extremely important to our national economy and that importance is all too often overlooked by our policy makers and the management establishment.