Media spin (or what's really going on in fisheries?)

When it comes to information on the fisheries resources and the fishing industry in the United States' EEZ, the National Marine Fisheries Service is just about the only game in town. While some universities carry out fisheries research in particular areas, NMFS does the greatest part of the survey work, data collection and analysis. Unquestionably, through its role as the national fisheries information clearinghouse, NMFS is responsible to a much larger extent than any other entity for the public's perceptions of the status of our fisheries. Accordingly, this puts the agency in a position to greatly influence public fisheries policies. Given this level of responsibility (and the fact that much of the agency's work is science-based and many of its employees are scientists), one would expect that fisheries information originating in NMFS - or it's parent agency, NOAA - would be totally objective and not subject to the kind of "spin" that has gotten so much media attention recently. Unfortunately it appears as if - in at least one instance - this isn't the case.

] read In a victory for natural resource conservation, Judge Steven D. Merryday of the U.S. District Court for the Middle District of Florida ruled today that strong management measures are justified to stabilize Atlantic shark populations, officials with the Commerce Departments National Marine Fisheries Service announced today. The ruling, which is in response to a suit brought against the agency for reducing shark quotas because of overfishing, confirms that the fisheries services science is sound. It included the statement by Terry Garcia, Assistant Secretary of Commerce for Oceans and Atmosphere and Deputy NOAA administrator This is a victory for sharks and fisheries service management alike. Initially we, and undoubtedly other readers, accepted this at face value.

The information in the release seemed unambiguous; a management program of the National Marine Fisheries Service had been challenged in court by the commercial fishing industry, and once again the agency, its science and the fish had been victorious.

The press release was reporting on a ruling on a suit brought by the Southern Offshore Fishing Association and participants in the commercial shark fishery against the Secretary of Commerce. The plaintiffs claimed that the commercial quota for large coastal sharks (LCS) proposed in the Shark Fishery Management Plan was unjustifiably restrictive and based on inadequate scientific information, that the National Marine Fisheries Service failed to consider the economic impacts of the proposed management measures on the affected fishermen, and that the regulations did not allow for the international nature of the fishery.

After receiving the governments release, however, we read articles from two Florida newspapers that, somewhat confusingly, seemed to be reporting a completely different outcome.

On February 25, Jacqueline Soteropoulos of the Tampa Tribune reported in Shark catch limits analysis ordered A federal judge criticized the National Marine Fisheries Service Tuesday for failing to weigh the tremendous impact of stringent quotas on commercial sharkers. U.S. District Judge Steven D. Merryday ordered the U.S. Secretary of Commerce to study the economic effects of the quotas and potential alternatives, and submit an analysis by May 1 (subsequently changed by the Court to May 15). In the meantime, the 1997 quotas will remain in effect to protect the overfished shark population.... Merryday ruled the National Marine Fisheries Service failed to comply with a law that requires federal agencies to assess the impact of proposed regulations on small businesses.

On the same day St. Petersburg Times reporter Larry Dougherty in Judge orders officials to review effects of shark fishing limits wrote For the time being, the order upholds the reduced limits on the harvesting of large coastal sharks.... The impact of these rules on fishing businesses needs another look, though, according to U.S. District Judge Steven D. Merryday. The judge ordered the Commerce Secretary to consider the economic effects and potential alternatives to the 1997 quotas.... The judge soundly rejected the National Marine Fishery Services contention that no shark fishing operation would be put out of business by the new quotas because they could easily switch to other prey. He went on to quote Judge Merryday when referring to part of the agencys justification for claiming no significant impact on the affected businesses ....it is a contrivance that imports arrogance.

The discrepancies between the newspaper and the agency accounts being so glaring and the decision being of potentially great importance to many members of the domestic fish and seafood industry, we went to the order (United States District Court, Middle District of Florida, Tampa Division, CASE NO. 97-1134-CIV-T-23C) filed by the Court on February 24 for a reality check. In agreement with the NOAA release, Judge Merryday concluded that the Secretary (of Commerce) acted within his regulatory discretion in setting the quotas but that he had also failed to conduct a proper analysis to determine the quotas economic effect on small businesses. 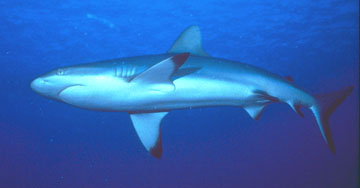 The NOAA release reported that the ruling confirmed that the science used by NMFS in the shark stock assessments was sound. However, on page 31 of the ruling Judge Merryday writes The (Large Coastal Sharks) modeling studies indicate collectively that, at present, there is no scientifically mature, experientially validated, and proper method for measuring and projecting shark stocks. Presumably the ideal method awaits the assimilation of more complete data, the restoration of old data, the development of more refined modeling, more conclusive studies on stock and fishing migration, and the enlightening passage of time and events and later (page 35) Undeveloped science and incomplete data currently preclude precision. Judge Merryday did conclude that, based on the uncertainty regarding the status of the shark stocks, the Secretary was acting within his discretion in setting the quotas. Its difficult to imagine how this can be interpreted by NOAA to be a confirmation of the soundness of the underlying science.

Both newspapers reported on the failure of the agency to analyze economic effects of the proposed regulations (the Regulatory Flexibility Act - RFA - requires Federal agencies to consider effects of proposed regulations on small businesses and design mechanisms to minimize adverse impacts). NOAA addressed this issue with the statement Judge Merryday ordered that shark quota reductions remain in place pending further analysis of economic impacts on fishermen....

This glosses over a significant and extensive, though unflattering to the agency, portion of the decision. NMFS initially certified that the proposed reduction in the commercial LCS quota would have no significant impact on the types of businesses specified in the RFA and accordingly failed to prepare an Initial Regulatory Flexibility Analysis (IRFA). On this point Judge Merryday wrote in his decision The RFA watch-dog, the Small Business Administration, also strongly criticized NMFSs no significant impact certification, stating that it was perplexed and bewildered by the illogical certification.... Even crude calculations, SBA explained, demonstrate that the Commerce Departments RFA thresholds were met. Then, looking at NMFSs Final Regulatory Flexibility Analysis (FRFA), Judge Merryday wrote:

Accordingly the Court remanded the RFA determinations to the Secretary with instructions to undertake a rational consideration of the economic effects and potential alternatives to the LCS quotas and to submit to the Court an analysis that complies with applicable law by May 15, 1998. The quotas that had been set will be kept in place pending this analysis.

This is a significant victory for the commercial fishing industry in particular and for small businesses in general. The fisheries management system has been increasingly ignoring the economic interests of those affected by its management plans. Among other things, Judge Merrydays decision has shown that this trend wont be allowed to continue.

Of greater possible significance, however, is NOAA/NMFSs apparent willingness to spin its communications, something that both the shark decision and the subsequent agency release graphically demonstrate. NMFS is for all practical purposes the sole source of information dealing with marine fisheries issues in the United States. If it, or its parent agency NOAA, can distribute such a one sided  and obviously self-serving interpretation of a court decision, how much trust can we have in the other information it releases to the public or in the decisions that are made based on that information? The public should expect  more objectivity, even if that objectivity might possibly damage the agencys public image.