Fishing and subsidies and excess capacity 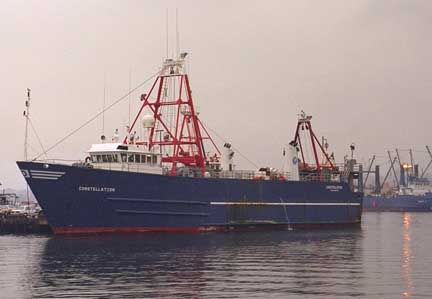 Government subsidies of fishing operations - both domestically and internationally - are being increasingly identified as a primary cause of a worldwide fish crisis. The theme is used as partial justification for the National Marine Fisheries Services homage to limited access and quota based management titled Economic Status of U.S. Fisheries 1996 [available as downloadable Adobe Acrobat files

]: ...a fishery resource is optimally utilized when the amount of fishing effort....is at the point where net economic benefits to the Nation are greatest, or at lowest cost for that level of harvest. This means harvesting only to the point where the additional benefits from harvesting the last fish just equal the additional costs incurred to harvest it. Its reinforced by a Scientific American article by Carl Safina reprinted on the Pew Charitable Trusts SeaWeb web site [

] ; A United Nations report notes that current world fleet cost cannot be matched by revenues at any level of effort, and that, as the opportunities for an increased catch from fishery resources have declined considerably, a continuation of high subsidies can only lead to greater and greater economic distress as well as further depletion. And, in a Worldwatch Institute press release [

] : Subsidies for the global fishing fleet have helped produce enough boats, hooks, and nets to catch twice the available fish, contributing to overfishing and destruction of fisheries. Its even being misapplied, as in the Philadelphia Inquirer [

] (Feeding The World - Seas lose bounty to overfishing, 11/15/96), when commercial fishermen are rightfully exempted from paying taxes which they were never intended to pay: American fishermen, for example, are exempt from a 20-cent-a-gallon federal diesel fuel tax, a subsidy worth about $250 million a year. Like the Boeing 747 comparison (below) this anti-subsidized fishing rhetoric is being echoed by virtually every group committed to saving the worlds fisheries.

The connection between government subsidies and the supposed fishing crisis is the idea that excess fishing capacity - the ability to harvest more fish than the fishery can comfortably afford to have harvested - is a result of subsidies and that excess capacity is wasteful both in and of itself and is, in addition, the primary cause of overfishing.

As far as any negative value being placed on having too much fishing power in a fleet, lets consider another situation. Major universities have large, expensive football stadiums. Theyre empty 99% of the time. They arent designed for the daily practice sessions held in them. They arent designed for the run-of-the-mill games played on most fall weekends. Theyre designed for the homecoming games and the end of the year, winning season games, the games that pay the bills and that keep the school playing football. They are purposely overdesigned for everyday football conditions and are wasteful only to the extent that college football is wasteful.

Fish share with football spectators the inconvenient characteristic of not being evenly distributed  in either space or time. They are generally found in concentrations that from season to season move from place to place. Much of a fishermans effort is devoted to seeking these concentrations - his equivalent of practicing. His game begins when he finds one. When he does, when it is big enough, and when he has a boat that has enough capacity, he can turn the fishing equivalent of a run-of-the-mill Saturday game into a homecoming weekend or even the Rose Bowl. This ability to catch the fish when they are there is equivalent to the ability to seat as many spectators as possible when they want to see a game. This ability, which we are now supposed to think is undesirable, is what allows a fisherman to keep on fishing through the lean times. And it applies to fleets as well as to individual fishermen. Sometimes its financed privately, sometimes publicly.

However its paid for, it isnt the cause of overfishing in those fisheries that are being overfished. Realistically, considering the growth in the regulatory burden on every fisherman, its difficult to see how overfishing can be seriously related to anything other than ineffective management and/or inadequate enforcement.

The National Marine Fisheries Service publication Economic Status of U.S. Fisheries 1996 states that In 1993, of the 163 U.S. fisheries whose biological status could be assessed, 40% were classified as overutilized and 43% were fully utilized. While this isnt good news, its not that bad, either. A not-so-obvious problem with the statement is that it doesnt put those 163 fisheries into any relative context. It would mean a lot more - but could have a lot less impact - if it showed just what proportion of our fisheries are actually being overfished.

The Natural Resources Defense Council, in the Executive Summary of Hook, Line & Sinking - the crisis in marine fisheries, reports Roughly 70 percent of the world's commercially important marine fish populations are now fully fished, overexploited, depleted, or slowly recovering. This situation is mirrored in United States waters, where 80 percent of marine fish populations of known status are classified as fully fished or overexploited. While containing the same information as the above NMFS statement, this sounds a bit worse, a bit more ominous. (On a somewhat related note, in a world in which starvation is a critical, ongoing and increasing problem, who wouldnt expect a large percentage of the worlds fisheries to be fully fished and by what stretch of the imagination could that be considered to be part of any crisis?  The compassionate might actually consider it a crisis that there are any fisheries at all that are not being fully fished.)

Then an announcement this week for another doom and gloom press conference, this one by the Pew Charitable Trusts SeaWeb, referred to ...recent reports that roughly 80 percent of marine fish populations in the United States have been fished to or beyond their limit. Again the same information, but omitting the three words of known status and other changes turn it into a declaration of severe problems. It appears that weve gone from an undetermined proportion of our U.S. fisheries being fully or overutilized to roughly 80 percent fished to or beyond their limit in only two iterations.

Time and again, these extremely pessimistic and prejudicail pronouncements of too much fishing and not enough fish are being peddled, with subtle variations, to an only partially informed public. And they always seem to be carefully crafted to cast the worst possible light on the situation - and the commercial fishing industrys role in it.


Crisis in fishing or in communications and credibility?


Is the condition of our fisheries as grim as its being made to appear? Are the experts in agreement on the extent of the problems confronting the United States fisheries? According to the National Marine Fisheries Service - the same Federal agency that originated the utilization estimates that appear to have initiated the above escalating alarms - in its Congressionally mandated Report on Status of Fisheries and Identification of Overfished Stocks [

]: Based on the criteria specified in the Magnuson-Stevens Act, the Report on the Status of Fisheries finds that 86 species are listed as overfished, 183 species are listed as not overfished, and 10 species are  considered to be approaching an overfished condition; for 448 species, the status relative to overfishing is unknown. Whenever possible, species were assessed using existing overfishing definitions in FMPs or FMPs under development; the remainder were evaluated using the 1995 edition of Our Living Oceans."

The PEW, NRDC and first NMFS statement each creates a distinctly and significantly different impression than the one NMFS conveyed to Congress. According to the Congressional report, 96 species out of 727 are known to be at or approaching the overfished level. Thats thirteen percent, far less than PEWs roughly 80 percent, and a figure that would obviously have conveyed a much different message concerning the health of our oceans and marine fisheries resources had PEW chosen to use it. One cant help wondering how an organization like the Pew Charitable Trusts, with the vast resources it has at its disposal, could be at such seeming odds with the Federal agency charged with monitoring our fisheries, particularly when that agency, the only one collecting comprehensive data on marine fisheries in U.S. waters, is responding to a Congressional mandate.

So whats really going on? Sure, some fisheries are being fished too hard. Because we cant manage very precisely, some always have been and probably some always will be. But are we on the brink of a crisis? If we are, why dont the real numbers demonstrate it? Why all the semantic, statistical and aeronautical contortions? Lawyers use the expression res ipsi loquitor. Perhaps that applies here as well.