In recent months there has been a great deal of misinformation circulating about the new elver (immature American eel) fishery in New Jersey and its supposed impacts on the mature eel and other fisheries. Assemblyman Gibson, being willing to acquaint himself with what is actually known about this fishery as well as with eel biology in general, has introduced legislation that will provide both much-needed regulation to the fishery and much-needed support for further scientific investigation of this economically and ecologically important species. This legislation, Assembly Bill No. 675, was passed by the General Assembly. Senator Cafiero has introduced the same legislation in the Senate (Senate Bill No. 457).

In view of this we thought we would provide you with these two pages that examine some of the claims of those seeking to close this fishery completely and also provide documented information dealing with the elver fishery and those facets of American eel biology and eel aquaculture that are relevant to it.

 Claim: A fishery focusing on immature eels prior to spawning could have a detrimental effect on the adult eel population. Fact: American eels spawn only once (in the Sargasso Sea). After spawning the eels do not return to the water bodies where they matured. Thus, any eel fishery must necessarily be directed at pre-spawning individuals.

 Claim: The removal of millions of immature eels during their upstream spawning migrations could devastate the population of adult eels.  Fact: According to James McCleave, Ph.D. (Professor of Oceanography at the University of Maine and author or coauthor of over twenty articles dealing with eel reproduction and biology), In fact, in a onetime spawning, fecund species, with a long lifetime before that one reproduction (such as the American eel), prudent conservation strategy would increasingly and preferentially protect females the closer they get to reproduction

 Claim: A minimum eel size is necessary for a sustainable fishery.  Fact: Again, according to Dr. McCleave It is more logical, if anything, to place a maximum size limit on the harvest of eels.  (Note: while some of the anti-commercial fishing activists claim, seemingly with the best interests of the eel stocks in mind, that a six inch minimum size is necessary, in reality this is the minimum size at which immature eels become usable as bait by recreational fishermen.)

 Claim: This is a new fishery driven by recent increases in eel aquaculture that if permitted to continue could result in severe and permanent damage to eel stocks. Fact: Driven by a comparable overseas increase in eel aquaculture and a corresponding increase in elver demand, a similar fishery developed in the Atlantic coastal states back in the 1970s. As the chart below (the data is from the NMFS Commercial Fishing Statistics web site

) shows, there is no evidence that this extensive elver fishery has had any negative impacts on the subsequent natural production of eels in New Jersey. 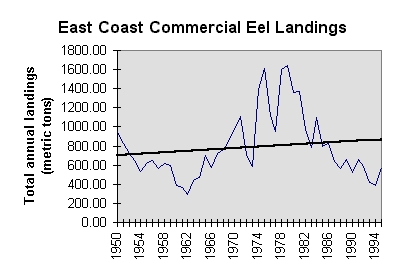  Claim: With no investment and minimum labor, hordes of people are getting rich by netting unlimited numbers of elvers and selling them at $350 per pound. Fact: It takes a coincidental convergence of a number of environmental conditions to create an elver run that will provide profitable fishing. The stream flow and the tidal stage have to be exactly right and the fisherman has to find a suitable location to fish. While a fisherman can harvest several pounds of elvers a night when conditions are optimum, that level is the exception rather than the rule. The often-repeated $350 per pound represents the high end of the market for elvers in prime condition and is definitely not the rule (and besides, taking our rapidly growing trade deficit - much of which is attributed to fishery products - into account, high priced exports like elvers become increasingly important to the overall economy).

 Claim: The participants in the New Jersey elver fishery arent traditional commercial fishermen but are outsiders who were attracted by the get-rich-quick nature of the fishery. The economic benefits from New Jerseys elver harvest arent being shared by New Jerseys traditional commercial fishermen.  Fact:  Its undoubtedly true that some of the participants got involved in the elver fishery because of the perception that it was an easy way to make a lot of money. Fishing alongside them, however, are many New Jersey baymen; sometimes second or third generation fishermen who put together a solid living by participating seasonally in a number of fisheries. With the increased management-mandated restrictions in their other fisheries, this elver fishery has allowed many New Jersey baymen to stay on the water.

Much of the rhetoric aimed at closing down the elver fishery is coming from the same people and the same organizations that seem intent on stopping or drastically limiting all of New Jerseys commercial fisheries. Weve heard variations of the anti-elver harvesting arguments twisted to fit into anti-menhaden, anti-horseshoe crab, anti-mackerel, anti-striped bass, anti-shad and anti-every significant commercial fishery mold. While we no longer have to, at this point we hope that others will begin to question the real motives that are behind their blanket condemnation of virtually every important commercial fishery.

There have been problems with this most recent incarnation of the elver fishery in New Jersey and in other states. We are exceedingly grateful to Assemblyman Gibson and Senator Cafiero for taking the time and the trouble to accurately identify these problems and to thoughtfully design legislation that will effectively address them. The legislation that they have crafted not only extends much-needed protection to both the elvers and to the baymen and other business people that depend on the income they generate. Equally importantly, it provides the opportunity to collect and analyze the scientific data that everyone agrees is so necessary to managing this valuable fishery sustainably for the benefit of all New Jersey citizens.

We appreciate the fact that the General Assembly recognized the rightness of Assemblyman Gibsons approach rather than bending to the whims of those self-serving advocates of a total closure of this and other fisheries. We hope that the Senate will do the same. Its the right thing to do for the eel resource and for the bayman that depend on it.

The Atlantic States Marine Fisheries Commission, through its American Eel Technical Committee, has stated that this fishery is biologically defensible if it is managed properly and is actively engaged in developing a management plan that should be adopted by all of the Atlantic coastal states. The funds that Assembly Bill No. 675 would provide through the sale of elver licenses will support this effort. We are committed to cooperating fully in any way that we can with both the Commission and the Division of Fish, Game and Wildlife to insure that we have a management program that will allow the continuing utilization of our New Jerseys American eel resources into the future.