Were going to devote this and the next FishNet to a discussion of where the commercial fishing industry seems to be headed. However, we thought it might be helpful to first talk about where the industry has been and where, in our opinion, it is today. In this way we hope we can provide readers interested in fisheries issues a somewhat broader context than is usually presented to them.

Commercial fishing has been around for quite a few years. Fish and shellfish have been an important part of humankinds diet since our first ancestors stumbled onto a beach. The earliest fishermen and women used simple gear - hands first, then spears, then hooks - to harvest water dwelling creatures one-by-one. Considering the obvious limitations of such techniques, fishing could not have become an efficient means of feeding larger numbers of people until the development of nets, either fixed in place and set in wait for the fish, or movable and used to pursue them through the water. In either case, the nets served simply to strain the fish out of the water column. As far as the basics of catching fish are concerned, not much has changed since then.

As weve written in earlier FishNets, fishing on what is sometimes referred to as a truly commercial scale has been practiced for well over a century. For most of this period it was more or less smooth sailing for the commercial fishing industry. Barring the occasional attempts by groups of sportsfishermen to grab entire species (successfully with striped bass in New Jersey) or areas, and several World Wars, commercial fishermen went quietly about the business of providing the non-fishing public with their share of what was a bounteous public resource without interruption. But in the Sixties our waters were invaded - legally, of course - by huge fleets of foreign factory ships and the catcher vessels that supported them. This invasion, and the resulting public outcry, was the impetus for the drafting of the Magnuson Act in 1976. This legislation eventually resulted in virtually halting foreign fishing in our Exclusive Economic Zone. It also established the Regional Council centered fisheries management system that is still in place today.


Starting just about twenty year ago, and spurred by the enthusiasm generated by the phased removal of foreign fishing boats from our coastal waters, a major initiative in Washington - one that was echoed in most coastal states - focused on expanding our commercial fishing industry. State governments, usually in partnership with Federal agencies, were competing to build integrated seafood processing centers on undeveloped coastal sites; government loans and other financial incentives were readily available for vessel and onshore handling and processing construction; fisheries that were underutilized were identified and utilization plans were designed to remedy this situation; and new markets were being sought for U.S. seafood products worldwide. To whatever extent overcapitalization is a problem in our fisheries today [

for another perspective on "overcapitalization], this is the period when most of it occurred. And it occurred not only with the approval, but most usually with the very active support of those same agencies that are now convinced it is the greatest problem our fisheries are facing.

Less than two decades ago commercial fishing was considered a growth industry, one deserving of the serious attentions of governmental agencies and private investors. In stark contrast, in recent years few other industries have come under the level of public scrutiny, and fewer still have generated the focused antagonism, that commercial fishing has. Media assaults on various aspects of commercial fishing have become commonplace, and severely restricting seafood harvesting - and, of course, restricting the consumption of domestic seafood - has spawned its very own group of dedicated conservation organizations. 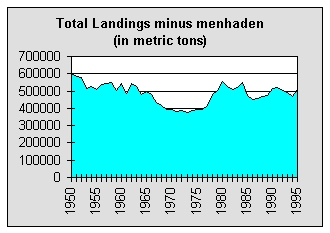 Various technological innovations - progressing from sail to steam to diesel power, from beam to otter trawls, from cotton nets to synthetics, from dead reckoning to radio direction finders to loran to GPS, and from sounding leads to precision sonar units - have supposedly all conspired to make todays commercial fishermen too efficient for their own or anybody elses good. In spite of this supposedly out-of-control fishing efficiency, as the box below and the chart to the left show (and assuming Mr. Cunninghams research was at least as accurate as NMFSs), the annual harvest from New Jerseys and the entire East coasts waters has remained remarkably stable for the better part of a century While its beyond our abilities to prove it, its hard to imagine that the slight overall decline is a reflection of anything other than significant and continuing habitat loss and water quality degradation. [The data used in the chart were retrieved from the NMFS Commercial Fishing web page

The increase in fishing effort that is generally assumed, at least by everyone with what increasingly appears to be an anti-commercial fishing rather than a save-the-fish bias, to be dooming our fisheries isnt reflected in the commercial landings. Not in New Jerseys total commercial landings going back a century or the East coasts for fifty years. Granted there have been significant technological advances that allow todays commercial fishermen to fish much more efficiently than they did fifty or a hundred years ago (an interesting exercise that well be getting to in an upcoming FishNet will be a comparison of technological innovations in recreational and commercial fishing). But the landings seem to demonstrate that this efficiency isnt really affecting the overall fisheries. While todays commercial fishermen are surely capable of catching more fish than they were at any time in the past, there is a compelling amount of evidence indicating that they arent.

Those with an interest in things environmental have in recent years enthusiastically adopted the term sustainable. This is used to describe that desirable condition in which our demands on the productive capacity of those components of the natural world that we find useful are in balance with the ability of the natural world to replace what we use. Either due to fishing pressure or any of a number of other natural or unnatural causes, the availability of particular species in the East coast fisheries rises and falls. However, the apparent steady state of the overall landings of the commercial fishing industry, regardless of these species-by-species variations and the evils of improved harvesting efficiency, seem to us to indicate a level of sustainability that should be the goal of other natural resource-dependent industries rather than the target of a large part of the environmental community.

If, once we allow for the impacts of habitat destruction and pollution, the overall level of commercial landings has remained more or less constant for several generations, what has changed?

The fishing industrys ability to adapt to varying conditions has been destroyed. Before modern fisheries management, fishermen could switch from species to species when conditions in the fishery - evidenced by declining catche rates - warranted it. The species-by-species management in force today precludes this. Fishermen and fish are paying the price.

Public perceptions about commercial fishing have been severely distorted. This is in spite of easily accessible information showing that the domestic fishing industry on the East coast hasnt been rapaciously expanding its harvest from year to year. Its also in spite of the fact that participants in todays so-called overfished fisheries are there at the invitation and with the support of the same management establishment that is now, with the enthusiastic backing of a vocal anti-commercial fishing movement, blaming them for there not being enough of particular species of fish.

Our estuarine, coastal and ocean ecosystems have changed, or been changed, in ways that without question are significantly affecting the fish and shellfish species that depend on them. In the last century weve lost over half of our wetlands to development [

to a page on wetlands]. Weve turned the remaining estuaries into the recreational boating equivalents of the Garden State Parkway [

to an article addressing boating impacts]. Weve added untold tons of noxious chemicals to our coastal waters and bottom sediments. And our weather patterns have changed dramatically - as have the oceanographic processes that are determined by them.

All of this has had a major impact on the fishing industry. Unfortunately the commercial fisherman has become a scapegoat for inadequate, underfunded science and politically distorted public policies. Well discuss what changes could remedy this and the consequences of those changes in the next FishNet.