A brief history of Overfishing (or, with apologies to Mr. Berra, Deja vu all over again) 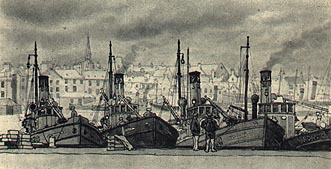 It seems as if just about anyone with any claim on the public ear would have it that we are now either on the verge of or well into a crisis of world fish production and the health of the worlds oceans that is of unprecedented proportions. Supposedly this crisis is a direct result of the severe overharvesting of fisheries resources brought about by modern fishing technologies. Primary among these doomsayers are fisheries managers, environmentalists, and sportsfishermen (posing as fisheries conservationists in a transparent effort to deflect attention from the impact their sport has on fish stocks and the estuarine environment). Even allowing for the increasing ability of the modern media to turn what was once the commonplace into the unique and ominous (recent El Nino coverage is a stellar example), the volume and the stridency of the sky is falling attention that fisheries problems are receiving is surprising. But is it justified? Is the fisheries crisis we are facing all that unprecedented or, for that matter, all that much a crisis?

In Hitting bottom - As trawling goes into high gear, undersea coastal habitat is being razed to the ground from the Winter, 1997 edition of a quarterly journal published by the Natural Resources Defense Council, author Dick Russell states ...by the end of World War II, the era of the trawler had arrived. Diesel-powered boats towing the newly devised otter trawls proved so effective that the schooner fleets could not compete. The quote, of course, leaves the reader with the purposeful impression that trawling is a post-WWII innovation and that prior fishing was done much more nicely with low-impact sailing vessels engaged in hook-and-line harvesting a la Captains Courageous. The point of the article is that trawling with motorized vessels, a modern technology, is having severe impacts on the ocean bottom and is in large part responsible for the current crisis in the worlds fisheries.

Then, from Greenpeace Internationals web site [

]....but by far, overfishing is now indisputably the greatest threat to the marine biodiversity in the North Sea. Overfishing in the North Sea has reached crisis levels as the region's governments continue to ignore scientific recommendations to cut fishing levels....Since the North Sea ecosystem faces a crisis, urgent measures are needed....Will they (fisheries ministers) choose to save the North Sea and the fishing industry in the long-term?...commercial fishing fleets are exceeding the oceans' ecological limits....unravelling the intricate web of marine biodiversity....Fisheries research and management institutions everywhere have fallen far behind the rapid advances in fishing technology, which makes overexploitation of fish stocks the rule rather than the exception.

Or from a Sunday, December 14, 1997 article in the New York Times on the plight of the Atlantic Salmon Carl Safina, a scientist, researcher and director of the Living Oceans program of the National Audubon Society, said the north Atlantic is the most fished-out ocean in the world. Safina....believes the North Atlantic is on the verge of becoming an ecological disaster zone.

These are all descriptions of an imminent and unprecedented crisis brought about by the wide-spread and intemperate use of modern technology. But how unprecedented is the crisis, how modern is the technology?

In his British Sea Fishermen [

] William F. Anson writes of a port on Great Britains west coast facing the North Seas productive Dogger Bank It was not until 1844 that Hull began to develop as a trawling port....The first steam trawler made her appearance at Hull in 1884. Twelve years later there were about two hundred steam trawlers as compared with one hundred and sixty (sailing) smacks. By the close of the century the picturesque, brown-sailed smacks had disappeared from Hull. New fishing grounds began to be exploited. Trawlers began to work off the Faeroes and Iceland about 1889. Then they went south as far as Spain. Northwards - still further - to Bear Island and even more distant grounds in the Arctic circle. High altitude fishing became the chief characteristic of Hull, as well as its mainstay, for after 1936 very few trawlers remained fishing on the North sea.

While these early trawlers used beam trawls rather than todays otter trawls, it appears as if power trawling isnt such a modern innovation but has been in widespread use, at least in the North Atlantic, for over a hundred years. How can trawling be held accountable for the recent devastation of our fish stocks? And, if we make the relatively safe assumption that these late 19th and early 20th century trawlers were steaming over convenient North Sea grounds to distant waters because there werent enough fish closer to home, it appears as if the Greenpeace overfishing crisis was here before and might not be entirely the result of modern fishing technology.

In The Historical Development of Fisheries Science and Management taken from a lecture given at the Fisheries Centennial Celebration (1985) by William F. Royce and available on the NMFS Northeast Science Centers web site [

] the author states that fisheries ...were vital to the early settlers because they provided profitable employment and winter food before the settlers could be sustained by farming. By the middle of the nineteenth century some of the fishery resources (in U.S. waters) had already declined by alarming amounts, as they had in the Northeast Atlantic, where the causes were hotly disputed. Here we have a reference to fisheries declining at alarming rates 50 years pre-trawling and 150 years prior to todays unprecedented crisis. Are we to believe that were in the hundred and fiftieth year of the imminent destruction of the worlds fisheries?

And what of our inshore waters, areas that, sportsfishing conservation groups would have us believe, have been transformed from the angling wonderlands of a generation ago into todays biological wastelands by the depradations of modern commercial fishermen? Are todays well-heeled recreational anglers the first to recognize that the only salvation of these areas and the fish in them was to grant their exclusive use to those who can afford to fish for their own amusement?

], which chronicles the decline of eastern Long Islands baymen and their way of life:


What does this all mean. Thats hard to say. It might well mean the current fisheries crisis might not require the immediate and drastic solutions that are being pushed by some. Perhaps there really is time for adequate research leading to measured and effective responses. Perhaps the severe economic dislocations to large parts of the seafood industry or entire fishing communities really are avoidable. Perhaps it also means that sportsfishermen are simply continuing their same old tricks to gain exclusive access to what theyve decided should be their water and their species.

Mr. Anson, whose book is cited above, quotes the late Stephen Reynolds, who died in 1919, "An analysis of the trade of our fishery, which is fairly varied and typical, will probably convey the clearest idea of the longshoreman's situation and of the difficulties with which he has to contend.... were it not for some pleasure boating in summer, as a stand-by, fishing could hardly continue.... Whereas twenty years ago upwards of thirty drifters used to put out to sea, there are now fewer than ten in active service. Fishing has become sad."  Its evident that hasnt changed much. It still is. The question we should be asking today is why?